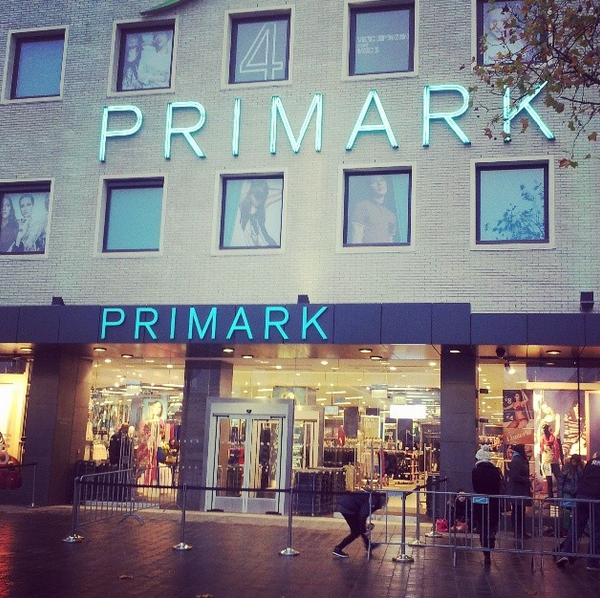 I am always up for roadtrips… if I am not the one driving to a location. But with the opening of PRIMARK, I absolutely did not wanted to go by train because not only would it take one hour longer but the ticket was pretty pricey. So I hopped behind the wheels and drove one hour to Eindhoven (The Netherlands).

I was very sceptical about the PRIMARK store because I went to the PRIMARK store in Belgium and it was a hot mess…. maybe not even hot, just a complete mess. I did not understand the whole hype of PRIMARK but I am relieved that the store in Eindhoven was super chique.

To avoid the traffic, I let my house quite early. I’m glad I did though because it took 30min for me to find parking and only to realize that I drove by the parking not once, not twice but three times.

Upon arrival, several hardcore PRIMARK fans were already lining up for the opening of the store. Since I was part of the press, I actually could go in two hours prior to the official opening, have a bite to eat and shop around. I felt quite bad for the people waiting outside but I was utterly relieved that I did not have to stand among the crowd. IT WAS CHAOTIC!

The store has four floors! The best thing ever was the onesies corner! You should know how much I regretted not buying that strawberry onesie. I would dance my ass off in that thing!

Damage? Two blouses, one jeans jacket, one toilet bag, one water bottle and one pair of FAKE, lookalike, indoor uggs. I ended up paying $10 because PRIMARK gave us a gift card as a present. In the end, there was hardly any damage done. I am a happy cheap camper!